We have 96 guests and no members online

A bill intended to protect same-sex marriage in US law has cleared a procedural hurdle in the US Senate, with a number of Republicans who have previously opposed LGBT+ rights joining Democrats in voting in favour. 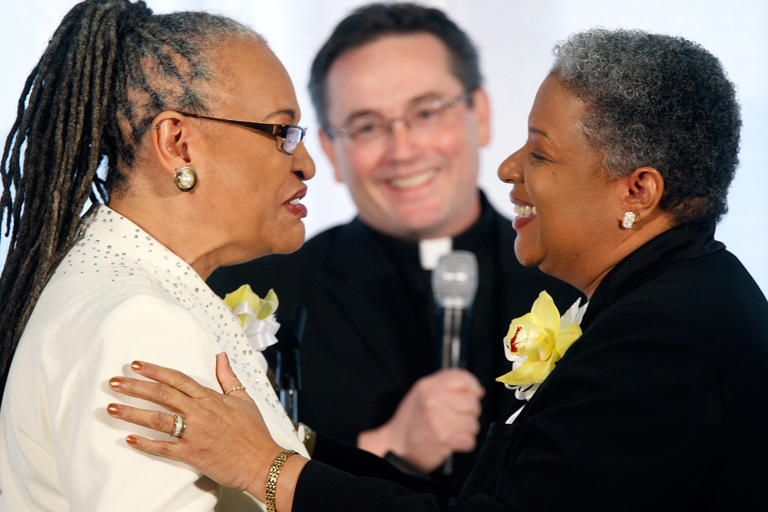 The Respect for Marriage Act was drawn up to see off any attempt to overturn the recognition of same-sex marriage, in the wake of the conservative-dominated Supreme Court’s decision to gut abortion rights and throw out decades of precedent in June this year.

The Senate is currently split 50-50 between Democrats and Republicans, but 60 votes are needed for legislation to advance under controversial filibuster rules – leaving Democrats seeking to peel off support from Republicans to pass bills.

A procedural vote on Wednesday saw 62 votes in favour and 37 opposed, with one abstention.

Wednesday’s vote will allow the measure to continue its journey through in the Senate, after a bipartisan group of senators proposed changes to protect religious liberty.

The bill would officially repeal a defunct federal law defining marriage as between one man and one woman, and instead requires the recognition of marriage in all 50 states regardless of “sex, race, ethnicity or national origin”.

Democratic Senator Tammy Baldwin, the first out gay person elected to the Senate, told the chamber that many couples were terrified their hard-won marriages could be rendered invalid at a stroke of a pen.

She said: “Right now, millions of Americans are scared that the rights they rely upon could be taken away, and they are scared for good reason.

“Regardless of your position on abortion, the highest court of the land has just overturned a precedent of nearly 50 years, and the same legal arguments the Supreme Court rested upon to reverse Roe v Wade could just as easily be applied to other cases, related to intimate relations, contraception and marriage.”

The right to marry was only fully extended across all 50 states by a 5-4 ruling in 2015 case Obergefell v Hodges, and since then the court has been packed with conservatives.

Ms Baldwin cited comments from right-wing Justice Clarence Thomas suggesting the reasoning used to unpick abortion rights could also be used on same-sex marriage. She said: “Given this landscape, it is not unreasonable for couples to be fearful that the protection of their marriages is in real jeopardy.”

The bipartisan push on the bill has been led by Ms Baldwin and fellow Democrat Kyrsten Sinema, who is bisexual, along with Republican senators Susan Collins, Thom Tillis and Rob Portman.

As part of a bid to win support from Republicans, an amendment to the legislation emphasised existing religious liberty and conscience protections – while making clear religious non-profits cannot be compelled to provide services, facilities or goods for the celebration of a same-sex union. The bill also rules out recognition of any marriage of more than two people.

Ms Collins, one of the tiny handful of Republican senators to have supported LGBT+ rights measures previously, told the chamber the bill would “help protect the rights of Americans while maintaining important religious liberty protections”.

Mr Portman, who has spoken previously about how having a gay son changed his view on LGBT+ rights, said: “In the minds of most Americans, the validity of these marriages is a settled question, and the majority of Americans want this question to be settled. It’s important we resolve that issue.”

Democratic Senate Majority Leader Chuck Schumer said: “This bill is as personal as it gets for many of us, myself included. My daughter and her wife are expecting a baby next spring, and I want to do everything possible to make sure their rights are protected under federal law.

“This is a great chance to do something very important for tens of millions of Americans. No one should have to worry about whether their marriage will be invalidated in the future.”

No Senators rose to speak against the bill on Wednesday afternoon.

The bipartisan bill stops short of some of the measures hoped for by activists – notably only protecting the recognition of same-sex marriages in all 50 states, rather than explicitly enshrining the right to marry a same-sex partner permanently into law.

In July, the legislation cleared the House of Representatives by a vote of 267-157, with support from all Democrats and 47 Republicans – while a surprise endorsement came from the Mormon Church, which has long opposed LGBT+ rights and opposes same-sex unions as a matter of doctrine.

The Church of Jesus Christ of Latter-day Saints said it would continue to teach that marriage is “between a man and a woman” but said the law “includes appropriate religious freedom protections while respecting the law and preserving the rights of our LGBTQ+ brothers and sisters”.

Evangelical lobby groups and Republican firebrands lined up against the legislation however, with the influential right-wing Heritage Foundation claiming “the bill isn’t about marriage or respect at all, it’s about imposing the radical left’s sexual ideology as state orthodoxy.”

After the bill clears the Senate, it will return to the House for a final vote before heading to US President Joe Biden’s desk to pass into law.

Proponents are hoping to pass the legislation before Republicans take control of the House in January.