We have 54 guests and no members online

Pa Salieu interview: ‘I believe everything that comes out of my head is spiritual’

In February last year, in a freestyle rap titled Next Up? which Pa Salieu performed for the web channel Mixtape Madness, he imagined his own shooting: “Had a dream that I’m dead-up, head top red-up/Must’ve got blown by a two-barrel, uh-oh.”

In the small hours on a Saturday night in late October, it happened. He was outside a pub in central Coventry, where he grew up. “I got shot in the head,” he says. “It was an event organised by one of my first managers. I got advice not to go, but I don’t believe in nothing. I was forgetting, this is Coventry. It pops off in Coventry. There’s gunshots. I could have avoided it but it is what it is. It’s part of the journey. I knew I wasn’t gonna die. It was bad, but something in my head thought, ‘F*** that. This has just started. Ain’t nothing gonna stop me, no way.’ There’s something I’m supposed to do.”

Twenty shotgun pellets connecting with the back of his head in a drive-by attack could have put a premature end to the career of probably the most exciting new voice in British rap. The 23-year-old’s powerful mix of grime and afrobeats styles have put him at the forefront of the latest wave of homegrown British talent along with the likes of Birmingham’s Jaykae, Manchester’s Aitch and Young T & Bugsey from Nottingham, and Londoners AJ Tracey, Tion Wayne, M Huncho and Headie One.

Shortly after the shooting he struck a confident tone, posting a photo from his hospital bed on his Facebook page, and writing on Instagram: “King Salieu will forever get it in. Best believe. Of course I survived this decade. You can’t defeat a man with pure energies.” Three weeks after the incident he was performing at the O2 Institute in Birmingham with Grammy-nominated American rapper GoldLink. 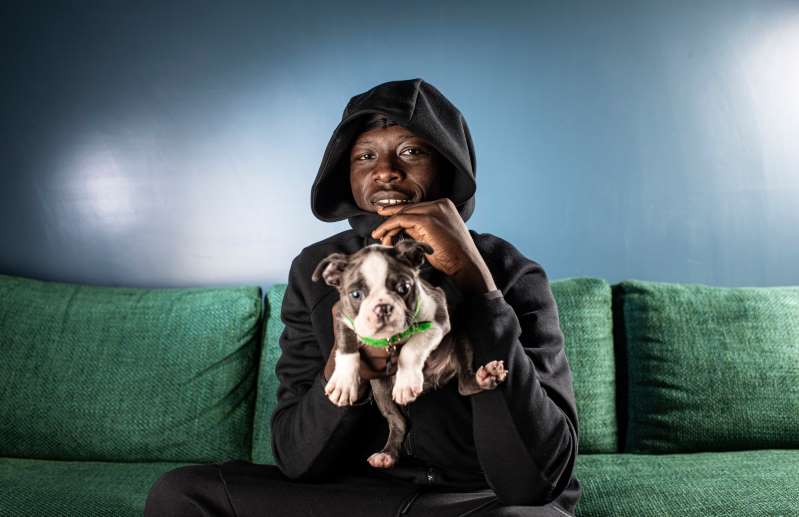 Today he speaks about his close shave in near religious terms, becoming visibly overwhelmed as he attempts to describe the connections between his life and his songs. “I said what was gonna happen to me before it happened. This is why music is so deep to me. I believe everything that comes out of my head is spiritual. This is a message. And you might find me a hypocrite talking all this about gunshots in the songs, but you’re gonna have to hear the pain before you hear any revelations, any goodness. You’re gonna have to hear the truth about what’s happened in my life.”

And soon about the glamour, too. He recently signed a major label record deal with Warner; a few days after we meet, he posts a picture on Instagram of him in a recording studio sitting beside experimental R&B star FKA twigs. A new single, the double A-side Betty/Bang Out, ought to take him much closer to mainstream recognition. Betty in particular is fantastic, a glowering mix of afrobeats and dancehall over which he chants melodically in his thick accent. Bang Out is faster, closer to grime, and takes the surprising step of sampling the voice of Eighties pop star David Sylvian. Pa has earned early comparisons to big-selling London rapper J Hus, who takes influences from his Gambian and Ghanaian heritage, but he has so much energy that I doubt he’ll stay in anyone’s shadow for long.

Pa Salieu is his real name, first and middle, and he was born in Slough as the first child of young parents who had moved from The Gambia. Aged two, he was sent back to West Africa to live with grandparents, so his parents would have increased time to work and could send more money home. “It was the greatest thing they could do. I know my culture,” he says. “We were near the capital city but in the country. It’s a good area. When it’s time to eat, we call our neighbours. Big plates, you know what I’m saying? It’s different. That’s why I’m proud. Maybe that’s why, when I came back here, they labelled me as a bad kid, ’cause I was very prideful of who I am and where I’m from.”

From the age of nine, he was living in Coventry, north of the city centre in Hillfields. His breakthrough song, the most played track of the year so far on BBC Radio 1Xtra, is about the area. It’s called Frontline, a deliberate war metaphor. “Any way you turn you’ll see crack fiends in Hillfields. It’s a weird area. A lot of stuff happens. I’ve never had a bike for more than two months,” he tells me.

The racial mix at his secondary school was predominantly Asian and white. He stood out, and got into trouble. “My accent is strong. I’m Gambian and I’m proud. I didn’t accept getting bullied so I’d try and fight back. The teachers never understood. They thought I was a bad youth. I wasn’t really. There was reasons why I moved the way I did.”

He says he wasn’t permitted to do music at school, but a visit to the home of a friend who had a rudimentary recording and editing setup was an epiphany.

“I literally fell in love with music and the studio,” he says. “There was a point when I wanted to try and do spoken word, because I used to like poetry in school. I used to write a lot on my phone, what I was feeling. I wanted to try this studio. I started freestyling, we recorded it, and I loved the way my voice was on there. Now you can hear what I’m saying.”

He downloaded Instagram and posted a few of these freestyles. “About 40 people showed love. I was like, ‘OK — well, Jesus had 12 disciples.’ It motivated me to carry on.” For the past three years, he’s taken every opportunity to work and record. When we speak he’s in Shepherd’s Bush, where he’s been holed up during lockdown, working with producers via Zoom as well as teaching himself recording techniques. “There was days when I dodged death because I was at the studio. I’m trying to see another life. I swear to God, I feel like I have so much to say.”

He has been vocal on the Black Lives Matter movement and attended protests in London. Last month he posted a long essay on his Instagram profile: “We need to start explaining why our lyrics contain so much pain. Why violence was dropped upon us. This was never our nature,” he wrote.

“I think it will change. This generation ain’t having it,” he tells me. “Here’s an example: if I’m running through my street and I see someone walking ahead, I’ll cross the road. I don’t want them to get scared. I’m a dark guy, I’ve got a hoodie on. They’ll get shook. This is all normal. I know people are afraid of me. It shouldn’t be like this.”

He continues: “I had a friend that died. We called him ‘the hood representative’. Since he died, that’s me. I’m the hood’s representative. I’ve seen everything. There’s so much in my head. I need to speak out. I’m not going home, just kicking back. I’m taking this serious. I know there’s a power you can use with this music thing. I’m just getting myself ready for greatness.”