We have 91 guests and no members online

A tourist was pelted with water and booed loudly by locals after she climbed a sacred, off-limits Mayan temple. 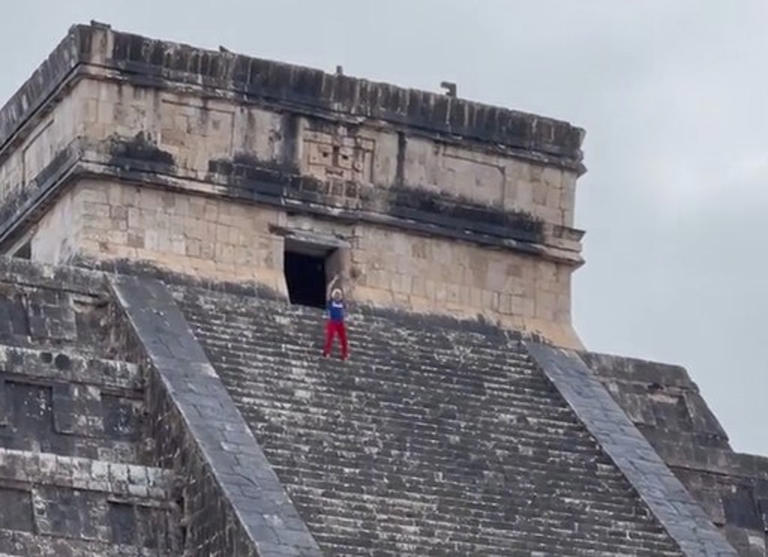 Tourist appears to mock the 'no climbing' rule with a little dance at the top.jpg© TikTok/@AngelaLopeze

The woman was filmed by bystanders scaling the enormous El Castillo (also known as the Temple of Kukulcán), a Mesoamerican step-pyramid at the Chichen Itza archaeological site in Mexico.

In the video, a blonde woman is seen dancing at the top of the steps as a security guard begins the long climb to remove her from the landmark.

By the time she was brought to the base of the pyramid, a crowd had gathered to boo, shout at and film her, chanting “jail, jail, jail” in unison.

A security guard tried to hold the mob back but the woman can be seen flinching as the crowd throws water at her in the clip.

The video has had more than 4.3 million views at the time of writing, with @angelalopeze, who posted it to TikTok, writing: “This is so disrespectful... don’t mess with my Mexican people.”

In a follow-up video posted to Twitter, bystanders are seeing grabbing the woman’s hair and throwing water at her as she tries to walk away from the mob.

The pyramid, which was constructed between the 8th and 12th centuries AD, has been off-limits to tourists since 2006; they may walk around it and photograph it but are forbidden from climbing or walking up it.

It had deep spiritual significance for the pre-Columbian Mayan people, and is one of the “New Seven Wonders of the World”.

The name and nationality of the offending tourist has not been identified, but she appears to be wearing a US flag motif on her T-shirt.

“There are human remains inside there. It’s like dancing on top of a grave. The disrespect,” wrote one commenter on TikTok.

“Imagine if someone climbed up on the altar in a cathedral and did a rude dance – this pyramid is sacred and that’s what she did,” said another.

“I instantly feel happy that everyone there wasn’t having it and rightfully boo’d her off,” wrote another.

They drew comparisons with the famous “Cersei Lannister’s walk of atonement” scene, where the character is forced to walk naked through the town while onlookers jeer at her, shouting “Shame!” while they pelt her with rubbish.

A few people defended the woman, saying she may not have understood the rules.

“The way they react is horrible. The tourist was obviously wrong, apply a fine, but the aggression is absolutely unnecessary,” wrote one Spanish-speaking follower.

Another user responded by posting photos of the woman jumping over clear barriers at the base of the pyramid before climbing it.

A third replied: “It’s been off limits for over a decade… absolutely no excuse.”