We have 111 guests and no members online

Her Majesty the Queen has pulled out of her traditional Easter Sunday service just days before it’s due to take place.

Instead, the rest of the Royal Family will attend the annual gathering at St. George’s Chapel in Windsor without the Queen.

The sudden news comes after the palace announced that Prince Charles and Camilla would step in for today’s Maundy Service.

It’s the first time since 1970 that a member of the Royal Family (the Queen Mother at that time, as the Queen was in New Zealand) has stood in for the monarch.

The tradition takes place on the Thursday before Easter Sunday each year, complete with some very strange practises!

From odour-busting bouquets to purses full of ‘Maundy money’, here’s what really happens during the Maundy Service.

According to the Royal Mint Museum, the Maundy Service has been a royal custom for centuries and could date back as early as the 1200s.

The tradition sees members of the royal family distribute money and gifts, and mark Jesus Christ’s ‘simple act of humility’ by washing the feet of the poor.

While it’s pretty unlikely that our present royals do any foot washing during the service, gifts are still a big part of the ceremony. 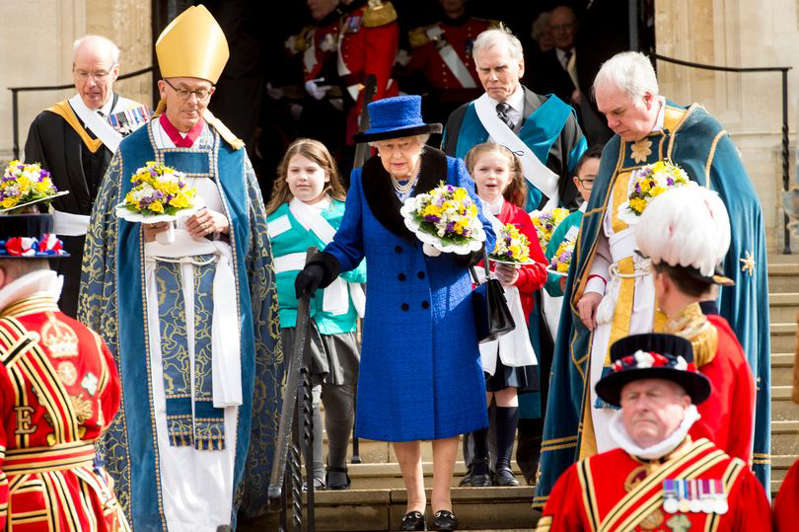 UK Press via Getty Images The service dates back centuries

Thursday, the Queen distributes special Maundy money to pensioners in a service which commemorates Jesus washing the feet of the Apostles at the Last Supper.”

That explains the lack of foot washing, then.

Each year, the monarch hands out the Maundy coins to a specific number of men and women depending on her current age.

These people are nominated by their local dioceses for contributions to their local church and community.

Getty Images Charles and Camilla stepped in to represent the Queen

Each recipient is given two little purses - one red and one white.

And in the red pouch, there’s a £5 coin and a 50p coin marking the Queen’s Platinum Jubilee.

What an exciting gift!

We can’t forget the nosegays.

Keeping to tradition, the Queen - or rather Prince Charles and Camilla, this year - is offered nosegays.

They’re sweet-smelling bouquets of flowers which, in years past, were used to overpower any unpleasant odours during the ceremony.

Our monarch (and her people) missed out on the Maundy Service for two years due to the Covid pandemic.

But would-be attendees didn’t miss out. She sent the Maundy money by post along with a letter to each recipient thanking them for their community work (which earned them the nomination to be given the coins).